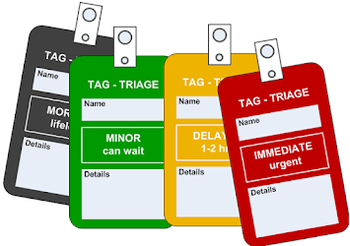 Simplified Triage tags. Real Life ones are far more comprehensive.
Triage is a system where in a mass casualty event such as an earthquake, hurricane, nuclear accident, major military attack, disease outbreak, etc. that causes enough casualties to overwhelm the available medical facilities, medical personnel divide patients into classifications in order to make the best use of the limited resources available to save as many lives as they can. The word, derived from the French verb trier, means "to separate." The broad goal is to sort patients into three categories:
Advertisement:

), so by necessity this is a basic description. Hospitals in particular may use a half-dozen codes or more once specialty codes (i.e. children) are included. The coding used here is for a mass casualty incident following the START

system that is widely recognized in the United States.

Mass casualty triage (e.g. disaster or major terrorist attack) and ordinary hospital triage (e.g. medical dramas) are not the same thing. Under normal circumstances, medical decisions are "most seriously injured" = "treated first". In a mass casualty event, this can increase the number of deaths by allocating too many resources to one person, so a different set of criteria is used. The ethical consideration is that futile care in such a situation is the exact same thing as consciously withholding care from people with better survival prospects.

One more thing that is important to understand for mass casualty triage is that, unlike a hospital assessment, it is intended to be conducted by minimally trained individuals. It's one of the first things that has to happen at a mass casualty event, so the people making life-or-death judgments do not have diagnostic equipment and are not necessarily paramedics. They may be the first police officer on the scene, the relatively uninjured infantry soldiers after a post was hit with an airstrike, or even civilian CERT

volunteers. Since this sorting can literally mean "life or death," there is a strong bias to "overtriage" (Yellow or "expectant" Black as Red) rather than "undertriage" (Red as anything else), often put as an order of magnitude where a 25-50% overtriage rate is acceptable to keep undertriage to less than 5%. The former is not ideal, but can be fixed later; the latter almost certainly means someone dies.

While rare or unheard of on large scale in the modern world, "untreatable" can also apply to "required resources are destroyed or not plausibly accessible." Major internal injuries/hemorrhage without access to a hospital, extensive 3rd degree burns in a nuclear war, that sort of thing. Many, many large-scale disaster movies and novels implicitly get into this territory even if not depicting a Apocalypse How. At a level beyond that are decisions such as "prioritize those under 55 in good overall health."

Under normal (i.e. non-mass casualty) circumstances, triage is practiced routinely in emergency departments and by EMS personnel; accurate medical or police/EMS dramas should have this. It's worth noting that these two systems do not always mesh with each other. EMS in North America use a three-tier priority system, whereas nearly all hospital emergency departments worldwide use a five-tier system. However, practically everyone everywhere can agree on the following:

Obviously, this requires hard decisions by medical personnel— it's not easy to follow dispassionate criteria like these when you have people all around you screaming for help, but it's a necessary evil. Many times, particularly following a disaster, triage comes down to a cold, often brutal calculation based on the available resources— what Sir Terry Pratchett called "the dreadful algebra of necessity". Triage professionals have The Needs of the Many down to an art form. It is Truth in Television that non-objective considerations (e.g. parents of badly injured child, high levels of personal involvement or resource investment in a now deteriorating case, casualty is a fellow first responder or doctor) will make this more difficult.

Works where Triage (or its equivalent) are present: