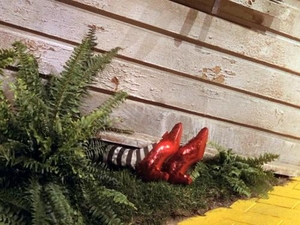 "As Coroner, I must aver
I've thoroughly examined her
And she's not only merely dead
She's really most sincerely dead."
A character dies. Shot, stabbed, fell, blown up, poisoned, succumbed to disease or old age — whatever the cause, they are kaput, deceased, packed their bags and joined the choir invisible, gone to Heaven... or Hell... or somewhere else. They've kicked the bucket and are now an ex-character.
Advertisement:

In fiction, as in Real Life, it's all too common, but in fiction, it's often dramatic, occasionally shocking, and frequently undone. Some works have death as an everyday occurrence, whereas others go out of their way to avoid it. Some call it something else, some never let it stick, and others make damned sure that it sticks. Mooks tend to die a lot; Heroes not so much, unless the story takes a darker turn. Some works, however, take the logical conclusion of having everyone die.

We have a whole index of tropes that talk about the ways to kill characters or cope with their deaths, and an index of ways to reverse those deaths. As Character Death is so common, it is considered an Omnipresent Trope and thus no examples are needed on this page. This marks it as one of the few Death Tropes that does not require a spoiler warning.

As with any other trope, don't assume a death is self-explanatory, please provide context and be descriptive when writing examples on a work's page. Also, make sure that there isn't a more specific Sub-Trope to cover the situation, which is virtually always the case.

Example of:
End of an Age