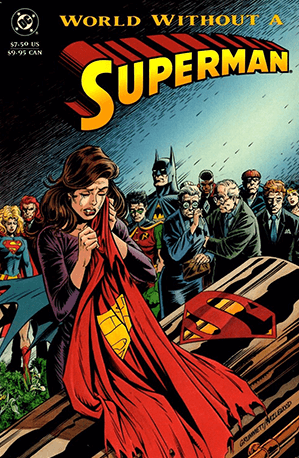 He gets better.
"Everybody wants a happy ending, right? But it doesn't always roll that way… Then again, that's the hero gig. Part of the journey is the end."
— Tony Stark, Avengers: Endgame
Advertisement:

Audience expectations are that The Protagonist has Plot Armor. But like most audience expectations, some writers like to subvert this. Which leads to the trope title; although it is not quite Exactly What It Says on the Tin since The Protagonist does not have to be a Hero Protagonist for this trope to apply, and this trope does not apply if The Hero is a Hero Antagonist. As long as they don't end up bringing the hero back later, this can also be a good way to show that Anyone Can Die.

When this happens in the middle of a work, make sure not to confuse this with Our Hero Is Dead, Disney Death, and Not Quite Dead. However, it can use a different protagonist afterward, either through Take Up My Sword or switching perspective.

When this happens at the end, it is one of the main causes of a Bittersweet Ending or Downer Ending. This can mean that The Bad Guy Wins, or it can be a Heroic Sacrifice. Your Days Are Numbered is when they knew they are going to die at the end. On the other hand, if the hero Died Happily Ever After or found peace in death, it might even qualify as a Happy Ending.

Of course, sometimes the hero's dead from the very start of the story; in that case, see Dead to Begin With and/or First Episode Resurrection.

Compare Decoy Protagonist, where the dead hero turns out to be not the real protagonist, who will appear later.

Note: This is both a Spoilered Rotten and a Death Trope, meaning that EVERY SINGLE EXAMPLE on this list is a spoiler by default and will be unmarked. This is your last warning, only proceed if you really believe you can handle this list. That being said, it's also possible that examples may involve subversions or multiple protagonists.

The Death of Alex Murphy

Officer Murphy is rushed to the ER, where his life flashes before his eyes as he dies.

The Death of Alex Murphy

Officer Murphy is rushed to the ER, where his life flashes before his eyes as he dies.