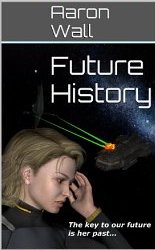 is a space opera novella by Aaron Wall, published in February of 2014. It follows the adventures of Amelia Hanson, a starship engineer who begins experiencing memories from her own future, starting with her death. Together with her friends, she must find out what is happening and how to respond in order to save her future self, and the human race, from war with an inscrutable alien foe.

Future History is the first published work of its author, who wrote it in more or less its current form while still in high school. It is available only on the Kindle ebook store right now, but can be read on a PC using a free emulator program from Amazon.