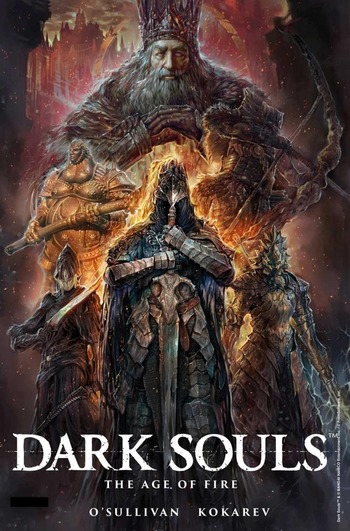 "Oh surely though already knowest this story of yore? That of the uniform'd world...the dragons that roam'd there...and the Lord of Light that fell'd them from the sky?"
"Forsooth, this tale hath no hero. Only Silver Knights. And chief among them Arkon."
— Narrator

Dark Souls: The Age of Fire is a comic set in the Dark Souls universe, written by Ryan O’Sullivan, and illustrated by Anton Kokarev. Unlike previous series outings in the comic genre, who seemingly had almost no connections to the games, Age of Fire is the complete opposite, being an Origin Story of sorts, detailing the backstories of famous characters form the games, such as Knight Artorias the Abyss Walker, and even the first Lord of Cinder himself, Gwyn. The comic begins during the final days of the horrific Dragon War during the Age of Fog, and continues on into the dawn of the Age of Fire, when Gwyn ruled from Anor Londo.

In a world where ancient Lords wield god-like powers and Everlasting Dragons soar the skies, what place is there for mortal men? Join Silver Knight Arkon, a powerful warrior in Lord Gwyn's army, on a quest for redemption and survival, as we journey to age before the undead curse blighted the land of Lordran.

The first issue is set to be released on May 23rd, two days before Dark Souls: Remastered comes out.