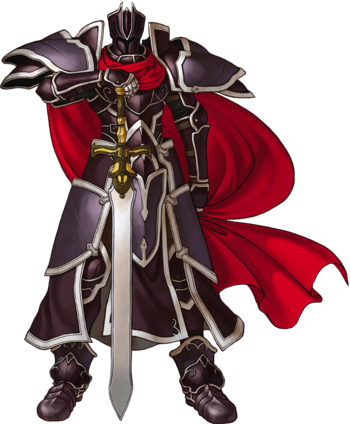 NONE SHALL PASS.
"...ride forth on a jet black steed, murder your enemies in one fell blow, and bring nightmares to every corner of the land. If this sounds good to you, consider the career of black knight."
— How to Be a Villain, Neil Zawacki
Advertisement:

An enigmatic warrior, clad head to toe in armor black as night, which he is never seen without. Usually ridiculously powerful, he is feared by all who know of him. Wielding a sword, speaking in a low monotone or sinister growl, and looking totally badass while doing it, he is almost always a major antagonist. Commonly fills the role of The Dragon in fantasy stories. The Hero probably has a score to settle with him. The mystery surrounding his true identity is often a main plot point. Given his armor, he can show up and fight in The Tourney without betraying it. Sometimes there's nothing but the suit of armor. Sometimes, they're even a girl.

A Black Knight is usually found in settings in which a Knight in Shining Armor is also present. Frequently, they revel in combat. A common subversion is that they're not actually evil, but merely a Self-Proclaimed Knight.

The trope name comes from the black knights of feudal Europe, men who would paint their armor and shields black for a number of reasons. One reason to do this was because they had no liege, making them analogous to Rōnin Samurai. The black paint prevented the armor from rusting, which made life moderately easier for knights without a squire.note Having no squire may also explain why such knights are portrayed as never taking off their armor: it's really hard to get all that on and off without help! A more sinister motive for the paint was to disguise who it was they served. A knight could move freely and serve his lord's wishes without bringing him blame by painting over his coat of arms, one of the few ways to reliably identify someone in full armour and a helmet. This is Older Than Print, going back at least to Arthurian legend. Note that, in its original usage, a Black Knight was not necessarily villainous, though he was dishonorable, which in the Middle Ages was barely a step up.

Note that, although being a black knight, this character is still a knight. This places them rather high among the list of potential candidates for Dark Is Not Evil, or at least a sympathetic form of villainy. While that can take a variety of forms, they rarely are the Knight in Shining Armor. More likely, they can be anything from a Knight in Sour Armor to a Noble Demon. This character very rarely is a total villain, but also only rarely The Hero. If they are villainous and end up fighting another bad guy, the chances that they are A Lighter Shade of Black in that situation are extremely high. They might also be the holy, chosen guardians of The Sacred Darkness or a Magic Knight who uses that power alongside their sword.

A Sub-Trope of Evil Wears Black. A Monster Knight has a high chance of being a Black Knight. If the Black Knight is in service to a female villain, then it may be a case of Dark Lady and Black Knight. Compare Tin Tyrant, which applies this trope to an Evil Overlord character by giving them a Scary Impractical Armor (though the armor itself may not be literally black). Contrast The Paladin.

Not to be confused with that Sonic the Hedgehog game, although it's also part of this trope. For the pinball tables by Steve Ritchie, click here. Or the hit single by Deep Purple (this one is called "Black Night"). And not necessarily The Dark Knight.

A villain who can turn those he knights into mindless knight minions. His civilian self is Armand D'Argencourt, Adrien's fencing instructor, who unsuccessfully campaigned for mayor and had his past used against him. His Akuma is contained in his sword.

A villain who can turn those he knights into mindless knight minions. His civilian self is Armand D'Argencourt, Adrien's fencing instructor, who unsuccessfully campaigned for mayor and had his past used against him. His Akuma is contained in his sword.