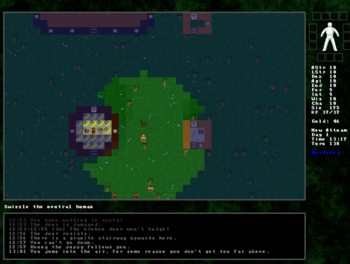 was version 0.40, back in 2002. As of 2019, the game's latest release is 0.57, created after years of inactivity from the original creator and the development moving into the hands of the community from 2015. You can learn more here

The story has you taking on the role of a slave working on a banana plantation who has been entrusted with an important letter by his master. For the early part of the game, that's just about as far as the story goes, but it begins to unravel itself if you can progress far enough. It keeps its graphics simple, like many other Roguelikes, but the game is notable for having a set of well-developed systems in the game engine, like body parts, prayer, and simple yet intuitive combat.

It's dark in here!
Veteran kamikaze dwarf of (god name): (sobs) I've lost all of my friends and self-esteem because of the failure.
Example: You dive into a brief but thought-provoking debate about neolithic sick literature with Kaethos the village elder.
Sir Haedlac Galladon VII the master guard: My great-great-grandfather, Sir Haedlac Galladon IV, once told me a tale from his own grandfather, that when Petrus first led the Revolution, his beard was only one foot long. Not that I would believe such outlandish claims.