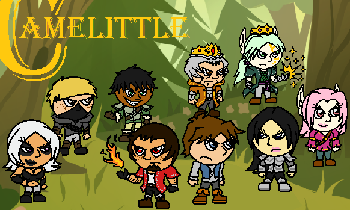 that focuses on four adventurers in a comedic fantasy world with swords, magic, monsters, and fourth-wall breaking. The characters are drawn in a chibi art style. The main characters, called The Good Guys, are actually all selfish jerks who will rob any innocent passerby they meet on the road.

Summary of Chapters One through Four:
It begins with The Good Guys traveling through the forest after having won the King's Tournament - held by the Human King Duret - to receive their prize money in the city of Camelittle. On the way, they are attacked by Elves, bandits, a psychotic serial killer, etc. Once they arrive in Camelittle, King Duret reveals that his tournaments were just ruses to gather three strong adventurer teams (The Good Guys, The Shadowfighters, and Team Marauder) and bribe them into doing his dirty work. Each team is sent to one of three towns in an effort to kill the series' antagonist, a Black Knight called "Big Bad." The Good Guys come to Clown Town after many shenanigans, and they fight and kill the Clown King of Evil, Giggles. After leaving Clown Town, they traverse the Frostbite Mountains, where they are ambushed by Team Marauder, and Jack adopts a magic wolf puppy he names Black Fang. The Good Guys return to Camelittle, believing they have killed Big Bad, only to find that King Duret has long been pulling the same trick on several adventurers to try to have Big Bad killed. The king's dinner party is crashed by the wicked Snuggie Daemon, who reveals that the real Big Bad is alive and well. King Duret orders the Good Guys be dragged by the Elven King Daigulus to Elfdust City, where it is suspected Big Bad is hiding near. In the treetop city, an angry young Elf named Cidos longs to be promoted in the Elves' annual ceremony of ranking magical competency. The ceremony is interrupted when a powerful Black Knight - the Sloth Knight, a minion of Big Bad - attacks. Cidos flees Elfdust City, then The Good Guys kill the Sloth Knight. Once they flee the city themselves, they are ambushed by their rival team of lady adventurers, The Shadowfighters.

Current Discontinuation:
The author says in his DeviantArt journal that there will be no more of the comic posted online past the series' first four chapters. He says the hand-drawn comic serves as a rough draft for something that might come in the future, such as a complete revision in color. All strips have been taken offline and cannot be viewed anywhere.

Quest of Camelittle provides examples of the following tropes: