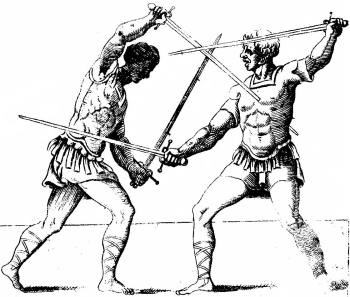 The guy on the right should have studied his Agrippa more.
"If one sword has a power of 100, then using two swords would make it 200, right?"
— Lloyd Irving, Tales of Symphonia
Advertisement:

This trope refers to wielding two weapons at once. After all, if one weapon is good, then two weapons must be twice as good. The tactics can vary widely. A character might be concerned only with offence and therefore decides that he wants to kill with both hands rather than just one. More tactical characters might typically use their off-handed weapon for blocking or tricky counter-attacks.

The types of weapons used can also be diverse. If the character has one hand dominant, he might wield a long weapon in one hand and a shorter weapon in his off-hand, such as a classic rapier and dagger pairing. Two small weapons is also pretty common, with the idea that smaller, nimbler weapons won't get tangled up with each other. However, some characters will dual-wield long weapons, such as swords or axes, which is generally portrayed as quite a feat. A Bifurcated Weapon might allow the character to switch between one- and two-weapon styles on the fly. On the extreme end of the scale, a character might wield a One-Handed Zweihänder in each hand!

Game mechanics often grant additional attacks to characters with two weapons. In many games, the potential for additional damage is often balanced out by imposing penalties to damage or "to hit" chance, which may be improved by investing in skills and abilities related to two-weapon fighting. In a few games, choosing specific abilities or classes may be required to be able to equip weapons on both hands at all.

Whatever the weapon, you'll probably see a lot of Flynning and Slice-and-Dice Swordsmanship in the choreography. Two crossed weapons are also perfect for a Blade Lock.

Dual-wielding appears much more often in fiction than real life because it's... well... cool. In real life, having a single two-handed weapon or a sword and shield is simply much more practical in most situations than dual-wielding blades. Basically there are a lot of drawbacks to dual-wielding, and most of the advantages have big asterisks next to them. Where dual-wielding did happen was mostly in formalized duels, and even then not with two blades of the same length but rather with a sword and dagger. See the analysis page for more details.

A Double Weapon is a variation of dual-wielding in which the character wields two weapons that are attached together. An easy way to up the ante even further is to be Multi-Armed and Dangerous. Any fighting style with multiple weapons may be a manifestation of Heroic Ambidexterity.

Zorro manages to fence two opponents at the same time by dual wielding.

Zorro manages to fence two opponents at the same time by dual wielding.