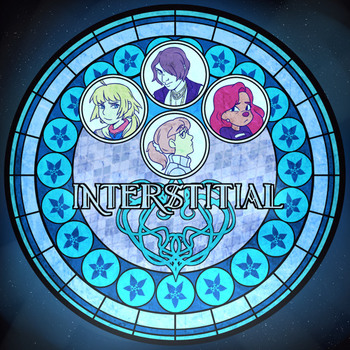 Jo: This show will have a tonal variance unlike what any program has ever attempted! Because this game is inspired by the Kingdom Hearts franchise, it will have deep and meaningful encounters about friendship and the power of relationships, but we're also—
Wheels: Gonna play characters from anything that Disney owns!
Hazel: We definitely had an in-depth conversation about the logistics of playing Encino Man!
— Conversation from Episode 1, setting the tone for the rest of the series.
Advertisement:

Interstitial: Actual Play is an Actual Play podcast designed to play test the Interstitial: Our Hearts Intertwined game system. After the game was successfully kickstarted within twenty four hours, the game's creator Riley Hopkins joined forces with the team from Got It Memorized? and their friends to have an adventure within the world of Kingdom Hearts, which inspired the game.

Season 1 lasted from July 6 to October 5, 2018. After its conclusion, a series of one-shot Door to Darkness adventures were released. The second season, titled Authority was recorded through the fall of 2018 and began releasing April 5, 2019. Riley, Jo, and Wheels initially announced that there were no further plans on a third season, though Extra Life specials were released in 2019 and 2020 as a reward for reaching their donation goals for their streams. A third season, Proximity, was eventually recorded in 2021 and began releasing on January 7, 2022. Though everything is released on a weekly schedule, those who donate to the Got It Memorized? Patreon

have access to all episodes as soon as they are released.

This Podcast Contains the Following Tropes:

Season 1
In a world where the only rule is that people and places are connected to Disney or Final Fantasy, and even then canon is nebulous, these heroes find themselves tearing through all manner of strange and wonderful worlds in the hope to defeat old and new enemies alike and keep a sinister plot from developing. The players for the inaugural season consist of:

A series of one-shots released and taking place between season 1 and 2.

Tropes for Door to Darkness:

Wheels GMs a new adventure with new heroes, who we first meet after their deaths. Their worlds have been consumed by darkness, but twenty ████ years later they are saved by...something. They are recovered fragments of their worlds and are promised to never fade, never perish, and will be acculturated and conformed to the new world they inhabit.

The other players for this season consist of:

A season recorded in secret through 2021 and released in 2022, which was also done to help promote the second edition. Jo (he/they) GMs a group of character brought together to pull off a heist.