Due to the sheer volume of spoilers, all of them are unmarked in this page. You Have Been Warned! 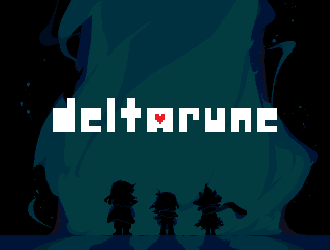 No one can choose who they are in this world.
ARE YOU THERE?
ARE WE CONNECTED?
EXCELLENT.
TRULY EXCELLENT.
NOW.
WE MAY BEGIN.
Advertisement:

Deltarune is an episodic Role-Playing Game by Toby Fox for the Nintendo Switch, PlayStation 4, and PC. A successor and "parallel story" to Undertale, Fox describes it as "a game you can play after you complete UNDERTALE, if you want to."

One day at school, Kris and resident bully Susie are tasked to get some chalk from the supply closet. Said closet turns out to be Bigger on the Inside, and Kris and Susie somehow fall into a dark and otherworldly place. They form an uneasy alliance to protect themselves against creatures that inhabit the place, and soon they meet the Prince of Darkness, Ralsei, who tells them that they are the fabled "DELTA WARRIORS" who are prophesied to save the world.

But the dark world is full of many opponents and oddball characters, as well as the continued question of what kind of heroes they will be, and whether the choices they make matter or not...

Gameplay fundamentals have changed little from Undertale (with Timed Hits and the ability to non-lethally defeat enemies being core parts of the system), though it has changed to accommodate three party members, each with their own classes and abilities. The game also introduces a TPnote "Tension Points" instead of "Tech Points", though a couple NPCs make the obvious "toilet paper" joke system for combat, allowing the player to build up a special gauge by guarding, taking damage, attacking or grazing bullets, with excess TP converted into money after battles.

Initially teased on the Undertale Twitter account on October 30, 2018, the first chapter was released for free a day later on Halloween, in the guise of a "survey program." The second chapter, also free, was released in September 2021; the remaining chapters are planned to release as a paid bundle some time in the future. The game is available from various digital retailers, as well as its official site.

SELECT THE TROPES THAT YOU PREFER.note Tropes not specific to any chapter. See the Recap pages for chapter-specific tropes.

open/close all folders
A-B
C-F
G-M
N-O
P-S
T-W
THANK YOU FOR YOUR TIME.
YOUR TROPES, YOUR WONDERFUL PAGE...
Will now be discarded.
Don't forget, I'm with you in the dark.
Feedback