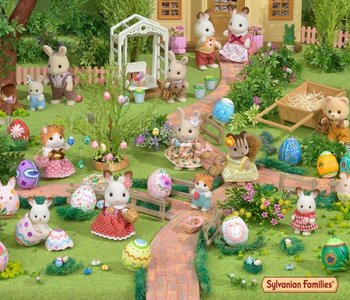 Copyrighting the word 'adorable' since 1985.
"Have your ever been deep inside the woods, to a place hidden behind numerous mountains? If you do, you'll find a village, more beautiful than any you can find in this world. That is the Sylvania Village. It is the place where the most kind-hearted friends in the world live in. Perk your ears and carefully listen to the wind. You will be able to hear the wonderful conversation between friends."
Advertisement:

Sylvanian Families is the name of a line of video games and anthropomorphic collectible articulated toy plush figures, created by Japanese company Epoch in 1985 and distributed worldwide by a number of companies. The characters, grouped into families, are woodland creatures such as rabbits, foxes and bears. They remain a quintessential part of the 1990s boom in craze (or fad) toys.

The general design of families, clothes, furniture and vehicles is set in 1970s rural Britain (which is when the parents who would be buying the toys would have been growing up), with most families apparently members of the middle classes, often hosting garden parties and going on short camping holidays. Many run small businesses. Most families start with a father, mother, sister and brother and add relatives on from there, often by way of grandparents, uncles, aunts, cousins and babies in different playsets, and then doctors, teachers and store owners (who also tend to be members of somebody's family). The product line is generally commended for the degree of detail in its teeny-tiny accessories.

Sylvanian Families are known today as Calico Critters in the USAnote When they first came out, they were known by the original name. This changed in the early 90s, but they are basically the same toyline, the only difference being packaging and the names of products. The most popular word used to describe them is 'adorable'.

You can practically imagine them saying "Are we going out for a bicycle ride, Mother? Oh how perfectly spiffing!" If this is all too saccharine for you, you could always check out the parody Forest Friends

- NOT safe for work!

Several video games for Sega Pico, GBC and GBA were also released in Japan only (but fan translations exist). Also there was also an animated series and a 3-Episode OVA series in Japan. Two more OVAs were produced in 2017 which were made available over Netflix worldwide, follow by the first set of shorts. A second set of shorts was later produced, however they were released onto Youtube instead, before being swiftly moved to Amazon Prime Video (but not Prime Video Global). The third season however was moved back to Netflix.

See also Maple Town for a similar franchise that didn't last as long, but is just as beloved by its fans.

Tropes associated with the Franchise includes: