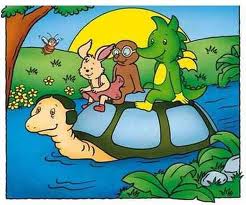 Tabaluga, a small green dragon, is the protagonist of a franchise of the same name.

He was created in 1983 by German singers Peter Maffay, Rolf Zuckowski, and Maffay's songwriter Gregor Rottschalk. Originally only created for one concept album, the franchise has since spawned 7 concept albums, 4 musicals based on them, a novel, a Game Show, an animated series by Yoram Gross with a special, audio drama adaptations of this series, several smaller books, Board Games, and an award for charitable work (the "Golden Tabaluga"). To top it off, a new CGI movie was released in December 2018, later dubbed and released in English in 2019 under the title "Ice Princess Lily", with its sequel in production as of 2022.

To make matters more complicated, concept albums and musicals have a separate continuity than the cartoon, which is more well-known internationally, with the second musical featuring both characters from the former and the latter.

Common connections between the continuities are Tabaluga, his father Tyrion (often as a ghost), and the villain Arktos.

Notable Works in the Franchise

open/close all folders
General Tropes
Tabaluga und Lilli
A musical about Tabaluga's struggles to free Arktos' "daughter" Lilli, based on the concept album of the same name.
Advertisement:
The Game Show
Two teams of 4 to 6th graders participate in mostly action-oriented minigames (a quiz-round was introduced later). The team winning more games has to win the final round to win the Grand Prize. (Roller skates/a skateboard/a bike + the latest gaming console + a T-Shirt). Later they also played for money for benevolent institutions.
The Animated Adaption
The movie "Tabaluga & Leo"
Tabaluga (2018) / Ice Princess Lily
Feedback