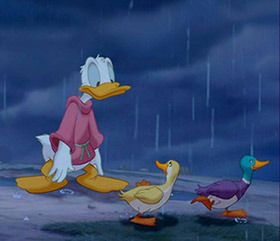 "Is... is this a job for human rights activists or animal welfare?"
"The classic Disney cartoon universe has traditionally hosted two types of animals. The first type includes human-like animals such as Goofy and Mickey Mouse who wear clothes, pay taxes, and speak in some kind of coherent human language. The other type more closely resembles actual animals — Pluto, for example, runs around naked, eats whatever he happens to find laying on the floor, and sniffs the crotches of random strangers, just like your average real-world dog (Goofy, on the other hand, only pulls that shit in fanfic)."
— Cracked, "5 Horrifying Details Hidden in Classic Children's Cartoons"

In many cartoon or comic settings one will often find that the characters are anthropomorphic animals. The audience tends to accept this without question — until animals that don't look or sound humanlike appear in the same continuity. Fortunately the audience doesn't usually have a big problem with this.

Things get unquestionably weird when non-humanlike specimens of the same species of animals the main characters are based upon are shown existing in the setting alongside them.

Some Furry Fiction Hand Waves this by explaining that their very humanoid characters have a science-fiction basis. They may be Uplifted Animals, animals that were given Anthropomorphic Transformations, aliens that happen to look like animals or something else. Alternatively, they might be established as a separate species from their non-anthropomorphic counterparts, meaning any non-anthros would be their equivalent of non-human apes. If no such explanation is given, though, the Fridge Horror is bound to set in eventually.

Fantasy settings may explain their Beast Men in other ways. They may be cursed or infested (Werewolf) humans; in this case the trope can be averted for drama. A wizard or god may polymorph himself or other people in a form that is more useful for the current task or simply magically create them from nothing. Or they simply exist in the setting (nobody can disprove that dragons and unicorns can or can't talk because they don't exist in Real Life).

The explanation that the anthropomorphic and non-anthropomorphic specimens (and humans) are completely separate species that simply bear some resemblance to each other appears surprisingly rarely.

One way to avoid this trope is if certain species are anthropomorphized, their species' original niche is replaced with a Fantastic Fauna Counterpart.

Very often crosses over with Carnivore Confusion, Furry Denial, and occasionally with What Measure Is a Non-Cute? and No Cartoon Fish. Adults Are More Anthropomorphic and Humanoid Female Animal can sometimes overlap with this trope. World of Mammals is a variant in which all the anthropomorphic animals are mammals. See also Anthropomorphic Shift, Feather Fingers, and Let's Meet the Meat. See Animal Gender-Bender and Ass in a Lion Skin for a whole new level of confusion. Very often happens because Most Writers Are Human and Furries Are Easier to Draw.

Not to Be Confused with Viewer Species Confusion.

It surely is confusing, right Donald?

It surely is confusing, right Donald?