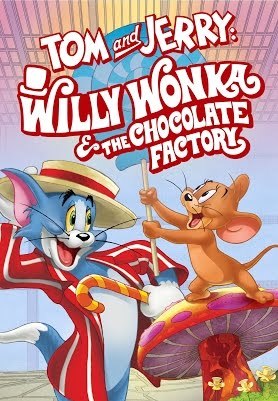 Due to some complicated studio politics on the part of Warner Bros., it ended up stalling the Tom and Jerry Direct-to-Video Film Series for a time, and also resulted in Roald Dahl's estate revoking the film rights to Charlie and the Chocolate Factory from WB and giving them to Netflix, though WB did acquire the rights to do a prequel to the original film some time before the release of the Tom and Jerry one in the form of Wonka, starring Timothée Chalamet as the title character, currently scheduled for a March 2023 release.

Tom and Jerry: Willy Wonka & the Chocolate Factory (in addition to many of the source novel and the source film) provides examples of:

Alternative Title(s): Tom And Jerry Charlie And The Chocolate Factory