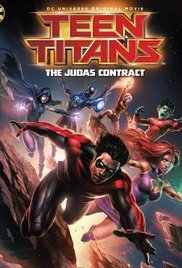 After defeating Trigon, the Teen Titans are soon joined by a new member, Terra, a young girl who can control earth, but is she all that she seems to be?

A movie in the DC Universe Animated Original Movies line and part of the DC Animated Movie Universe, Teen Titans: The Judas Contract is a sequel to Justice League vs. Teen Titans and an adaptation of The Judas Contract. In addition to the returns of Sean Maher as Nightwing, Staurt Allen as Robin, Taissa Farmiga as Raven, Jake T. Austin as Blue Beetle, Brandon Soo Hoo as Beast Boy, and Kari Wahlgren as Starfire, it features Christina Ricci as Terra and Miguel Ferrer in one of his last roles as Deathstroke.