Pets as a Present 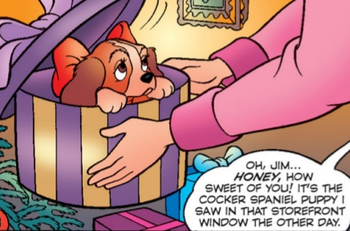 In fiction, a common way to get a pet is to be given one as a gift. This is usually a puppy or kitten for someone's birthday or for Christmas. For Easter, sometimes a rabbit or chick is given as a present (and then given away not too long afterwards). This trope is a heartwarming way to start off A Boy and His X story or introduce a Loyal Animal Companion.

Though this is frequently Truth in Television, it isn't advised. Animal welfare organizations and professionals universally agree that pets are a long-term commitment that should be agreed upon by the entire household. Pets should also be planned and prepared for before buying. As the saying goes, "Pets are for life, not just for Christmas."