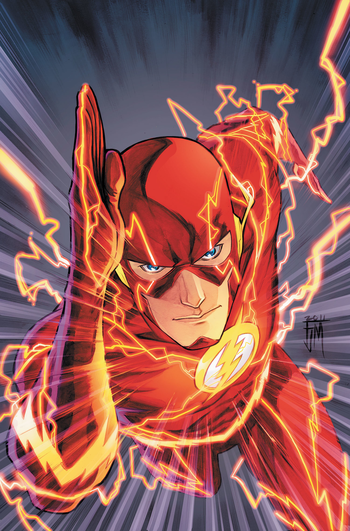 Although light is the fastest thing in the universe, it doesn't serve as a good symbol of speed because it's hard to physically represent light. There's also the tendency for light to be more associated with Faster-Than-Light Travel, which stretches the Willing Suspension of Disbelief for more "realistic" depictions of speed.
Advertisement:

So the next best thing is something most people are very familiar with: lightning (or electricity). As stated

by the US National Weather Service, lightning travels at about 1/3 the speed of light, making it a good symbol of speed since it can be drawn, and, because it doesn't move quite as fast as light, it makes a good symbol for Super Speed that isn't completely ludicrous. With this association, you can expect speedsters to move — often via Flash Steps — in a manner that resembles the erratic movement of electricity, like zigzag patterns, exceedingly straight lines, or jagged arches.

Lightning-powered super speed is sometimes Justified as Biofeedback powers because Lightning Can Do Anything.

Regularly overlaps with Ride the Lightning, which is using electricity itself as a mode of transportation, and Electric Slide, which is moving along power lines. The characters may or may not have lightning-based powers, or it may just be a visual Motif.