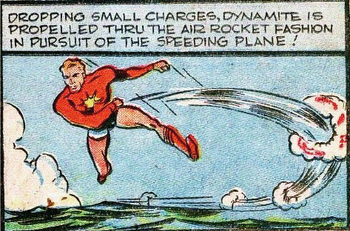 Stuff Blowing Up in movies and TV is cool and very common. When the hero isn't calmly walking away from an explosion, they're running away from it while still being caught by the blastwave and sent flying several meters onto conveniently located soft materials. Characters who become wise to this method of explosive propulsion will devise plans (improvised as often as not) where their escape or pursuit of the bad guys is accelerated by blowing stuff up behind them.

Naturally, the only harm from having a powerful explosion detonate very near is mild singeing on their clothes. Occasionally, this is justified by the character in question being Nigh-Invulnerable or using a ship designed to be propelled this way.

Sometimes this trope can be used to just move objects and not people attached to them. This is a bit more logical, since for obvious reasons this is not something you should try at home.

This is similar to the videogame strategy or move called Rocket Jump, where players launch a rocket just below themselves as they jump to go up much higher. To avoid overlap gameplay examples should go there, but if it only appears in cinematics the examples should go here. A distinct subtrope is the Orion Drive, which uses nukes, because nothing says boom like a nuke.

When preparing to escape the Tranquility, Ventress uses an explosion to propel her down an air vent.

When preparing to escape the Tranquility, Ventress uses an explosion to propel her down an air vent.