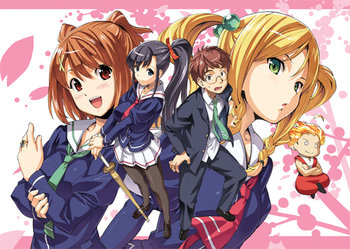 As the student council, they're charged with maintaining discipline at the academy. But that isn't what our pervy protagonist, Takeru Oyama, is interested in. Until a year ago, the academy was girls only. So now that it's gone Co-Ed, the student body is predominantly female and he wants to see as much of the "student body" as possible.

At least, he would, if his childhood friend Haruko, wasn't there to keep his wandering eye in check, since she's part of the disciplinary committee. But as luck would have it, he's a babe magnet. On his first day at the academy, the resident twin-tailed Tsundere (Himegami) literally falls into his lap and, at the introduction ceremony, he meets a strange girl named Inaho, who says she's his fiancee.

Harem related antics provide humor to balance out the underlying narrative, as the Kamigari group has their sights set on one student in particular, who's the key to releasing the seal atop Amanohara. So it's up to Tenbi's student council and the Venus Unit to keep it from happening.