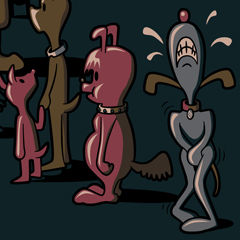 Alice gets up in front of the class and starts her speech, but something's wrong. She looks distracted, and she can't seem to stand still. Her legs and hips gently sway from side to side and her knees turn inward. Soon Alice is drawing odd looks from her classmates as they start to realize what's wrong: Alice has gotta go! The situation grows tense as she slowly becomes more and more restless, but at last her speech is finished and she can dash from the classroom in search of some badly needed relief.

It's a dance of the ages, that sometimes subtle and sometimes blatant collection of movements intended to resist the body's natural urges and avoid a messy disaster. Sometimes, the trope might be parodied by framing it as an actual dance, complete with music, and it may lead to an Accidental Dance Craze. Most commonly observed with children or those experiencing a lengthy Potty Emergency that might just ultimately result in a Potty Failure. Like those two tropes, it is frequently Played for Laughs.

Ralph Wiggum "dances" because he needs to pee, and Otto claims to be mesmerised by it.

Ralph Wiggum "dances" because he needs to pee, and Otto claims to be mesmerised by it.