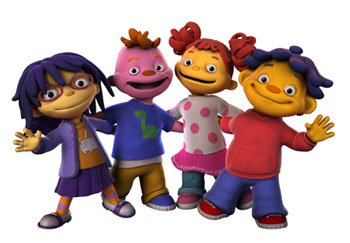 They're kind of like Muppets, but without the hand inside 'em. (L-R: May, Gerald, Gabriela, Sid)
Sid the Science Kid is a CGI children's Science Show produced by The Jim Henson Company. The show follows young Sid and his friends, May, Gerald, and Gabriela, along with their teacher, Teacher Susie. Sid is a budding scientist who regularly asks why things happen, what causes what, and also sings songs about it.

The show debuted in September, 2008. It has not made new material since 2013, but the show is now on Sprout and DVD releases are still easily found in stores.