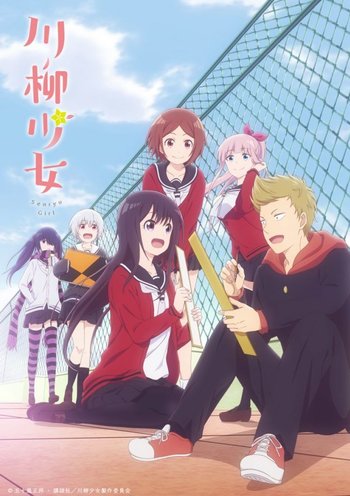 Nanako Yukishiro is a cute, cheerful Ordinary High-School Student with one odd trait: She communicates through senryū (a type of Japanese poem which follows many of the same rules as haiku) instead of speaking.note Technically she communicates in a combination of senryuu

.") For whatever the reason, the author chose to apply the term "senryuu" to anything that isn't a haiku following the 5-7-5 pattern. She is also part of the literature club along with Amane Katagiri, the club president, and Eiji Busujima, a former delinquent she's fallen for who wanted to make his own senryuu.

Senryu Girl (川柳少女 Senryū Shōjo, or Senryuu Shoujo) is a Yonkoma manga written and illustrated by Masakuni Igarashi.note The series isn't strictly divided into 4-page yonkoma; not all of the "ku" (or chapters) are four pages or even in yonkoma format. It was serialized in Weekly Shonen Magazine from October 2016 to April 2020, with its chapters collected into 13 volumes. An anime adaptation ran from April 6, 2019 to July 22, 2019, and is licensed by Sentai Filmworks. The anime is currently available for streaming on Crunchyroll, HiDive, and VRV, and can be viewed here

"I don't care about
"what others think as long as
"I can be with you."