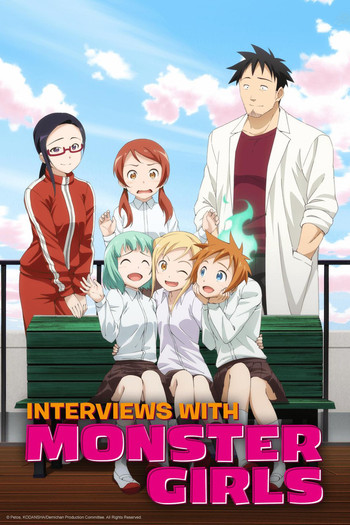 Just a couple of kids hanging around with their teachers.
Advertisement:

Be forewarned, for in this world, beings that are not entirely human are very much real...

Tetsuo Takahashi, a biology teacher at Shibasaki High School, was always intrigued by Demis - how much does the fact differ from the fiction? How do they deal with their conditions? How do they socialize with humans? He had one ambition that goes back to his college years - to conduct research into Demis, interview them and learn more about them. Unfortunately for him, his many attempts ended in failure - either the government didn't want to aid him, or because he just couldn't find Demis out on the street - most of them don't look that much different from normal humans. In fact, despite his deep interest in the matter, Takahashi has yet to actually meet a Demi.

This changes in an instant when he suddenly meets not one, but four Demis. They're his freshman students Hikari Takanashi the vampire, Kyouko Machi the dullahan, Yuki Kusakabe the yuki-onna, and his new co-worker, the math teacher Sakie Satō, a succubus. Takahashi can finally fulfill his lifelong dream, but may he have bit off more than he can chew? Meanwhile, despite being Demis, the girls continue to live out their daily lives to their fullest.

Interviews With Monster Girls (Demi-chan wa Kataritai, lit. "I want to interview demi-girls") is a Slice of Life Manga series by Petos, which began serialization in 2014 (starting out in Young Magazine the 3rd, but later moving to Weekly Young Magazine in 2021). It was adapted into a Anime series as part of the Winter 2017 Anime season by A-1 Pictures. It is available for worldwide streaming on Crunchyroll here

. Funimation's SimulDub of this series began on January 25, 2017, with new English dubbed episodes every Wednesday. Watch it here

. The manga is also translated into English by Kodansha USA.