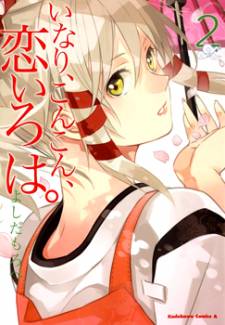 Inari, Konkon, Koi Iroha (translating as "Inari, Konkon, ABCs of Love"; "Kon" is the Japanese sound effect for a fox's barking) is a romantic comedy manga series by Morohe Yoshida. It ran in Young Ace from 2010 to 2015.

Ordinary Middle School Student Inari Fushimi wakes up late for school after having a dream of confessing to her crush, the popular Kouji Tanbabashi. On the way to school, Inari takes a shortcut in the temple shrine that she always visits and rescues what she thinks is a puppy from drowning in a stream. She contemplates confessing her feelings to Tanbabashi, but after accidentally humiliating her crush in gym class in front of everyone else, he refuses to accept her apologies—and to make matters worse, she secretly eavesdrops on Tanbabashi confessing to their classmate Akemi Sumizome.

Inari has all these thoughts in mind when she is summoned by Uka, a silver-haired and golden-eyed fox goddess who guards over the temple shrine that Inari visits. In return for rescuing the puppy before school that day, which turns out to have been none other than a little fox spirit, Uka offers to grant Inari one single wish in thanks. Without thinking, Inari blurts out that she wishes to be Sumizome. As one might expect, this wish does not go nearly as well as Inari had hoped—as she wakes up to find herself having been physically transformed into Sumizome. Hilarity ensues. Though Uka cannot return Inari to her original form, she offers Inari shapeshifting from her divine power, allowing Inari to change back.

Now that Inari can change her own shape at will, using her new skill is very tempting in her quest to win Tanbabashi's heart and to help those around her. However, Inari soon learns that her divine powers are anything but simple.

A 10-episode anime adaptation of the series premiered on January 15th, 2014.