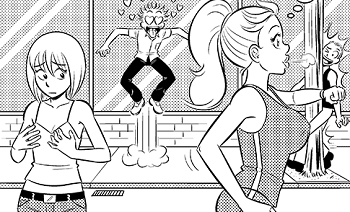 "WELL EXCUSE US FOR BEING FLAT!"
— Etna and Flonne, Disgaea: Hour of Darkness
Advertisement:

Many works are set in a culture where the common assumption is that "Buxom Is Better". This standard of female beauty can be a challenge for women with smaller breasts, and while some wear the "ironing board" title with pride, others are plagued by problems of low self-esteem as a result of their... un-bustiness.

This can be for a variety of reasons, but the most common anxieties are that she'll look less sexy to a Love Interest, be mistaken for a child, or be treated as underdeveloped and immature because of her small chest.

In fiction you frequently see this with teenage and preteen girls, disappointed that they're not as "mature" as their older sisters or more-developed peers, before ultimately learning An Aesop to love their body no matter what final shape it takes. It can easily become Hilarious in Hindsight if the character or the actress portraying her grows up and becomes quite big-breasted as an adult.

Things commonly done by this type of small chested woman:

While the trope is named after one of the smallest standard bra cup sizesnote The actual meaning of these letters varies by manufacturer and country, and many people don't know that cup size is always relative to band size

◊, e.g. 38C is about the same volume as 30F, for an Alliterative Name, the interesting thing is that a lady doesn't have to be "flat" or even remarkably small-chested in order to suffer from this anxiety. It's a state of mind that depends on what beauty ideal or peer group the character is comparing herself to, so even a girl or woman who fills a C-cup may feel inadequate in the presence of another who's an E-cup. Messages from the media, lack of self-esteem, or even just happening to associate with women who are bustier than average (sometimes the result of being the token average person in a World of Buxom) can give a female character a distorted image of what counts as "small".

Subtrope of Appearance Angst. Contrast Petite Pride for women who are small-breasted and proud. For "assets" on the other side of the spectrum, compare Big-Breast Pride and D-Cup Distress. See also Baby Don't Got Back, for the similar reaction to another body part. For the Spear Counterparts, see Muscle Angst and Teeny Weenie.

Anime Fanspeak refers to this type of character as a "Pettanko" (roughly, "completely flat").

The Hero is an A-Cup

While spying on Satan's date, Emilia gets distracted by Chiho's chest.

The Hero is an A-Cup

While spying on Satan's date, Emilia gets distracted by Chiho's chest.