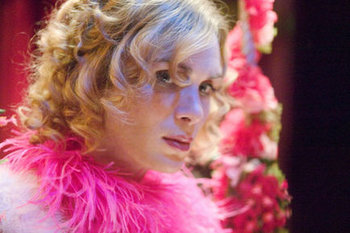 "If I wasn't a transvestite terrorist...would you marry me?"
Kitten: And the other thing about the Phantom Lady was, Bert, she realized, in the city that never sleeps...that all the songs she'd listened to - all the love songs - that they were only songs.
Bertie: What's wrong with that?
Kitten: Nothing, if you don't believe in them. But she did, you see. She believed in enchanted evenings, and she believed that a small cloud passed overhead and cried down on a flower bed, and she even believed there was breakfast to be had...
Advertisement:
Bertie: Where?
Kitten: On Pluto. The mysterious, icy wastes of Pluto.

Breakfast on Pluto is a 2005 movie directed by Neil Jordan (Interview with the Vampire, The Crying Game), adapted from the critically acclaimed novel by Patrick McCabe.

The film stars Cillian Murphy as Patrick Braden, a transgender orphan who prefers to be known as Patricia, or "Kitten", growing up in rural Ireland near the border with Stroke Country in the 1970s. Ostracised in her hometown and obsessed with the secrets surrounding her birth, she heads off to London in search of the mother who abandoned her.