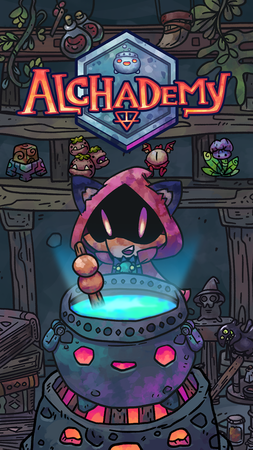 Alchademy is a Mobile Phone Game released in 2016 by HyperBeard Games. It's an Idle Game in which players mix ingredients in a Magic Cauldron to create more ingredients, which in turn become "creations".

There are five books, each containing different ingredients and creations to use. You don't mix the ingredients yourself - the mixing is done by little alchemists. At first, there is only one alchemist you can use, an anthropomorphic fox named Foxy, but as you get money, you can buy many more alchemists. Some are Funny Animals, some are monsters, but all of them are adorable!

Aside from choosing two ingredients to try mixing, the game doesn't have much in the way of gameplay. However, you can watch ads to earn money or skip waiting for the alchemist to finish waiting. You can also pop the bubbles that come out of the cauldron. Some contain money! Also, the alchemists will frequently "speak" to you with speech bubbles. Some quips are specific to a certain alchemist, some are said by all of them.

You can find it on the Google Play Store here

, or see the game's page on the developer's site here