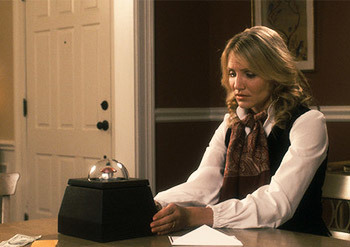 The Box is a 2009 science fiction/horror film based on the 1970 short story "Button, Button" by Richard Matheson. It was written and directed by Richard Kelly, a story that had been previously adapted into an episode of The Twilight Zone (1985), under the short story's original name, though with a different ending.

The story (which uses the Twilight Zone rewrite as the starting point) starts out with a simple premise — a married couple, Norma (Cameron Diaz) and Arthur Lewis (James Marsden), have hit upon unfortunate financial circumstances. Arthur is a NASA scientist with dreams of becoming an astronaut (and looking forward to the bump in pay from being picked to go out into space) while Norma is a private school teacher with a mangled foot. Their son goes to the exclusive school Norma teaches at, with the family getting a huge discount on tuition due to Norma's status as an employee. However, as the film starts out, Arthur is informed that he been rejected from receiving astronaut training, permanently stalling any hope of career advancement at NASA. Worse, Norma is informed by her employer that the private school is getting rid of the discount employees receive on their children's tuition, meaning that their son would have to start going to public school.

Their dreams of social mobility dashed, they receive a sudden visit from a man with a severely burned face named Arlington Steward (Frank Langella). Despite his frightening appearance, Steward is cordial towards them even as he makes a disturbing proposition to them: The couple is given a simple box with a button on it. If they push the button within the next twenty-four hours, they will receive $1 million in cash while a person that they don't know somewhere in the world will die.

The film follows the Twilight Zone version of the story, where Norma pushes the button over her husband's moral objections and the family gets the money. However, as he takes the box away from them, Steward gleefully reveals that he will soon reset the box and offer it to another couple, who in turn be made the same offer, with it implied that it may be Norma or Arthur who dies next when a stranger presses the button.

And this is just the first act! The remaining two-thirds of the film takes the story into a brand new Mind Screw direction, worthy of Richard Kelly's previous works.

No connection to 1967 cartoon short film The Box.