Throwing Off the Disability 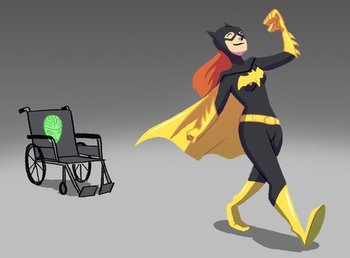 A character who has been disabled for an extended period, often physically or visually, suddenly regains the use of their disabled organ. Expect a dramatic shot of the crutch being thrown away, or the discarded wheelchair clattering its way to oblivion.

Explanations for this tend to fall into five varieties:

This trope can provoke the implication that any disabled person who doesn't throw off their disability must somehow want to remain disabled. See Epiphany Therapy for characters throwing off mental disorders or psychological trauma.

See also Artificial Limbs, Beautiful All Along. Compare Abled in the Adaptation, where a character’s disability in the original is left out of an adapted work, and Healthy in Heaven, for when characters lose their disabilities in the afterlife.