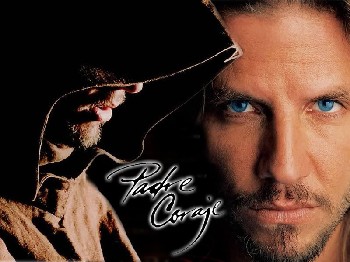 Padre Coraje (Father Courage) is a 2004 Argentine telenovela. It takes place in the 1950s, in the remote village of La Cruz. There is an evil mayor in the village, who exploits the rural workers. They have a folk hero, Coraje, a robed man who avenges evil. To fight against the mayor he needs to get into the village, into a position of power, but does not know how. A new Father comes to the local church, Father Juan, who is attacked. Coraje could not save him, but found what he needed: he headed to the village as the Father Juan (that nobody had seen before), and became the confident of the mayor, while still avenging evil as Coraje.