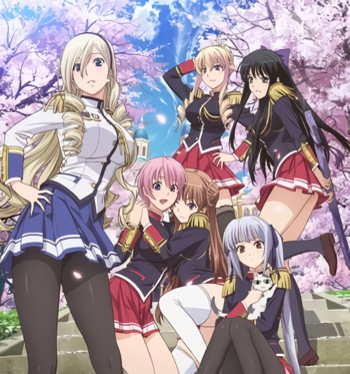 Takahiro is a recent immigrant from Japan to a country that's vaguely European with a former promising career in jousting, a popular international sport. However, following an injury and abandonment by his former teacher, he gave up the sport, but could not give up his love for it. Instead, he enrolled at an academy with a strong knight class. Though he did not become a knight, he wished to support one and became a begleiter, a sort of assistant to a knight in charge of tactics, support and maintenance equipment.

In the present, he has no exceptional results and hides his background. However, when his oldest friend Mio accidentally ends up in a confrontation with the noble Bertille he steps up to teach her how to joust. During this time, he also receives three requests to become a begleiter: First, from a cheeky second year of no special reputation named Noel, the student council president and best jouster in the school Celia and a special request by Celia's friend to take care of the genius first year Lisa, who stubbornly refuses to get a begleiter, despite her obvious need for one.

Walkure Romanze received an anime in the fall 2013 season with significant changes in the details and resolution. For tropes pertaining to that adaptation, please visit that page. It also has the fandisk More&More which provides routes for three supporting characters and the fandisk Re;tell which provides some bonus content for the four most popular of the heroines.