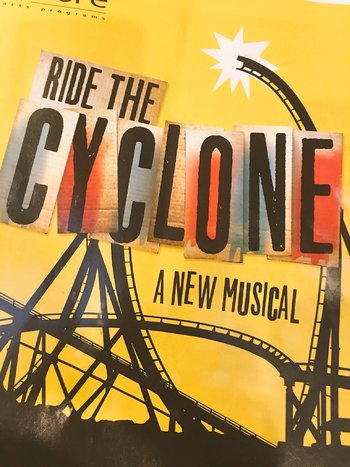 Six teens die.
One comes back.
Who will it be?
"Tonight I shall speak of these teenagers whose tales ended abruptly on a roller coaster in a small Canadian town in the middle of nowhere. The former St. Cassian Chamber Choir. And my part in the story? I read all of the children's fortunes. I felt their hopes, thoughts, dreams, knowing they would board the doomed roller coaster, and could tell them nothing. I even suggested they ride the Cyclone.
On Monday, September 14th, they would board the Cyclone roller coaster at 6:17 pm. At 6:19 pm, this same roller coaster's front axle would break, causing it to derail at the apex of the loop-de-loop, hurtling the children to their deaths!"
— The Amazing Karnak
Advertisement:

On Monday, September 14th, the five members of the St. Cassian High School chamber choir of Uranium City, Saskatchewan take a trip to the Wonderville Traveling Fairground, where they ride the faulty "Cyclone" rollercoaster and are propelled to their untimely deaths when their cart derails.

Two decades after “The Cyclone Accident” made national headlines and forced Wonderville into a hasty bankruptcy, the quintet’s souls (along with a mysterious girl whose headless body was found in the wreckage of the crash and assumed to be a member of the choir as she was in the same school uniform) appear in the dilapidated warehouse storing Wonderville’s hastily abandoned remains, only to be greeted by its own mechanical Fortune Teller, "The Amazing Karnak." Karnak himself is not long for the world (what with his wiring being gnawed on by a rat that's made its nest inside his case), but he does have legit mystical abilities and the power to send one of the kids back to the land of the living and survive the accident. They just have to make the case as to why they deserve life over death... over the other five teens that arrived with them.

So begins Ride the Cyclone, an uproarious, tragi-comic musical about living, dying, and loving told from the point of view of half a dozen dead teens vying for a second chance at life. Those teenagers are:

With book, music and lyrics by Jacob Richmond and Brooke Maxwell, Ride the Cyclone premiered as a cabaret at Atomic Vaudeville in 2008, later being adapted into a full-length show and playing across the U.S. and Canada.

was released to digital and streaming on May 7, 2021, featuring most of the cast from the Alliance Theatre run.

Tropes appearing in Ride the Cyclone: