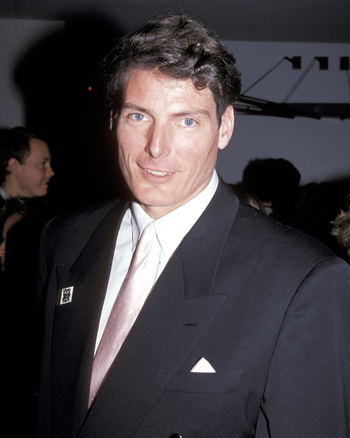 He made us all believe a man could fly.
"He wasn't just here to be an actor. He was Superman."
— Richard Donner
Advertisement:

Christopher D'Olier Reeve (September 25, 1952 - October 10, 2004) was an American actor best-known for portraying Clark Kent/Superman. In a professional sense he showed that brilliant acting always has its place — even in special-effect-heavy fantasy films like the superhero genre — but also left behind an awesome personal legacy of perseverance and advocacy.

Originally from New York City, he initially studied at Juillard's theatrical arts program with his roommate Robin Williams (with whom he became lifelong friends), but eventually graduated from Cornell. His major professional gigs were simultaneously in the Soap Opera Love of Life and in the Broadway play, A Matter of Gravity. In the latter, he became a close enough friend to the play's star Katharine Hepburn to get the gossip columns fluttering (despite the fact that she was old enough to be his mother). Eventually, he left and eventually appeared in his first Hollywood film, Gray Lady Down.

While it would become his Star-Making Role, Reeve was rejected three times for the role of Superman during the producers' frustrating hunt for the Super Hero. It wasn't until his face-to-face meeting with director Richard Donner and producer Ilya Salkind that he was chosen. Even then, he was signed on with an exercise regime supervised by David Prowse (better known to the world as the guy wearing the Darth Vader costume). In the film, Reeve proved a more valuable asset than anyone could have guessed: as a hobby, Reeve piloted a glider; this made his "flying" scenes feel realistic. Even more amazingly, Reeve demonstrated the plausibility of Clark Kenting when practiced by a good enough actor. Both skills, as well as general acting prowess, allowed Reeve to instantly eclipse his top-billed co-stars Marlon Brando and Gene Hackman as the true star of Superman. Overnight, he became the leading light of the rise of the modern fantasy film. For instance, after the The Muppet Show did their gloriously wacky Star Wars episode, the only way to follow up on that classic was to have the other contemporary fantasy superstar, Reeve, do the next one.

After the success of the first two Superman films, it appeared that Reeve was poised to become one of Hollywood's next great leading men (John Wayne himself reportedly proclaimed him as such). However, his career unfortunately proved turbulent. His artistic standards and his desire to avoid typecasting led him to turn down roles in American Gigolo, The World According to Garp, Splash, Fatal Attraction, Pretty Woman, Romancing the Stone, Lethal Weapon and Body Heat. Instead, he starred in a mixed bag of films like Somewhere in Time, Street Smart, The Remains of the Day and Village of the Damned (1995). At the same time, the Superman series was gradually cheapened by producers who dismissed Donner and replaced him with Richard Lester; Lester's fatal contempt for the comics eventually drove the franchise into the ground. His villainous role in Deathtrap is generally highlighted as Reeve's best non-Superman performance.

Even his real life had heroic moments: he once went to Chile, which was under the murderous tyranny of Augusto Pinochet, to help a group of arrested artists. Later, he appeared in commercials for the 1988 referendum to urge the people to vote for the "No" side and strip the dictator of his power (this can be seen in the Academy Award-nominated Chilean film No).

On May 27, 1995, Reeve had a serious horseriding accident. This accident led to a catastrophic spinal cord injury, rendering him quadriplegic. However, with the support of his wife and long-time friends like Williams, Reeve refused to surrender to his despair and instead went on to become a universally hailed advocate for spinal cord research and the disabled. He continued his career as a director, as well as starred in a remake of Alfred Hitchcock's Rear Window on TV and later made a guest appearances on Smallville.

Sadly, he died on October 10, 2004 at the age of 52, a day after being treated for an infected pressure ulcer. Before and since his death, he has been praised as a hero without a cape.

Christopher Reeve and his works provide examples of: