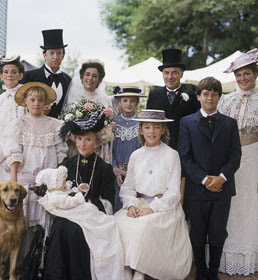 A Canadian television series that aired for seven seasons (1990–96) on CBC, created by the director of the Anne of Green Gables movies. The series can be considered as a sequel to the movies.note Although, beginning in 1903, it contradicts most of the movies. For example, Matthew should still be alive and Anne about 13, not a married woman. Set in Avonlea after Anne's departure, it tells the stories of Sara Stanley, daughter of a disgraced industrialist sent to live with her relatives in order to escape the public humiliation; the King family, the aforementioned relatives; and the rest of the colourful population of Avonlea. The show carried over many of the characters from Anne of Green Gables, including Marilla Cuthbert and Rachael Lynde.

The stories are loosely based on L. M. Montgomery's novels The Story Girl and The Golden Road (Sara is the eponymous Story Girl), with side-plots culled from Montgomery's many short story collections, most of which had nothing to do with the Anne of Green Gables series.

It was aired on the Disney Channel as Avonlea.

Road to Avalonia provides examples of: