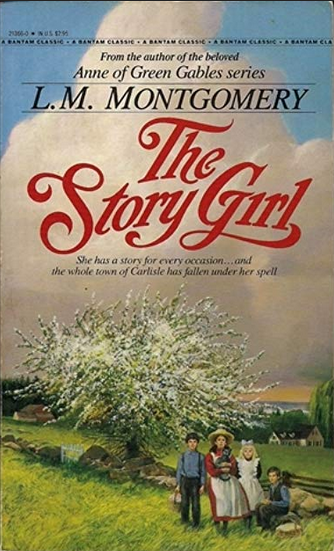 A novel duology by L.M. Montgomery, more recently rescued from obscurity by becoming the basis of the TV series Road to Avonlea.
Advertisement:

When their father lands a new job in South America, thirteen-year-old Beverly King and his younger brother Felix are sent from Toronto to spend a year at the old family homestead in rural Carlisle, Prince Edward Island. It's the first time they've seen the place, but they very shortly feel as though they've lived there always. Rich in both natural beauty and the many traditions and memories of the enormous (and enormously talented, not to say eccentric) King family, it's currently being held down by Uncle Alec, Aunt Janet and their three equally memorable youngsters: smart and snarky Dan, beautiful Felicity and sweet innocent little Cecily.

But the greatest discovery of all is their oldest cousin, fourteen-year-old Sara Stanley, aka the Story Girl. So-called after her extraordinary genius as a storyteller and actress—she's able to quite literally make the multiplication tables fascinating. As it happens she's also a semipermanent guest in the neighborhood, having been dropped off to stay with the kids' Uncle Roger and his sister Olivia at the next farm over while Sara's father, a wannabe artist, wanders Europe.

What follows is a sweet and gently funny series of riffs on the theme of being children and enjoying childhood, soaked in nostalgia for Montgomery's beloved PEI and studded with a number of actual old family and fairy tales as told by the one and only Story Girl. A sequel, The Golden Road, continues the adventures of Sara and her cousins as they begin to make tentative explorations into adulthood.

The TV series is an acclaimed but far from a faithful adaptation, essentially fusing the cast of The Story Girl—notably minus Dan, Beverly and Uncle Roger, and adding a crotchety aunt Hetty—with that of Anne of Green Gables and transposing the setting to Avonlea.