Converse with the Unconscious 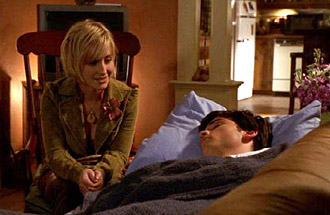 "I want to let you in on a little secret, Clark... I'm the girl of your dreams masquerading as your best friend.... I may not be the one you love today, but I'll let you go for now, hoping one day you'll fly back to me. Because I think you're worth the wait."
"I'm going to keep talking, even if you can't hear me."
— Fry, Futurama

Bob is unconscious, for a prolonged time.

Alice goes into the hospital room to talk with him. Possibly to say "How Dare You Die on Me!". Often prompts deep confessions of things she regrets never having said to him while conscious.

But watch out! The curative power of these confessions is mindboggling, although not absolutely perfect. Needless to say, the more embarrassing it was, the more they actually heard.

(A certain amount of Truth in Television, though not much; apparently unconscious people, whether in a coma or just asleep, may hear things, and talking to them is often encouraged.)

Sister Trope to Dude, She's Like, in a Coma! and Unbroken Vigil. Compare Talking to the Dead.