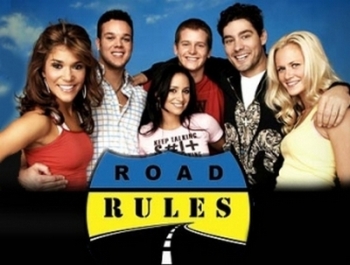 "Throw out your rules... these are Road Rules."
Advertisement:

Seeing the popularity of Reality TV granddaddy The Real World, MTV rolled out a new version that took place on an RV. The series followed six (originally five) strangers, similar in age and varied demographics of its sister program, as they traveled the country (or other countries, on occasion). At the start of each season, the cast members were required to surrender all of their money, and had to earn money to survive on as they traveled by either completing missions or performing odd jobs.

Of course, like The Real World, this show also slowly evolved into a shell of its former self. Whereas the show was originally meant to resemble "The Real World on an RV", it eventually became more like "Fear Factor on an RV". The missions originally seemed to emphasize experiencing new things, especially in the context of travel, with the last usually an "ultimate ending" such as a bungee jump; in addition, mission failures were infrequent. However, by the show's end, almost all of the stunts were usually either incredibly hard or incredibly gross, and with them came "punishments" for the team that failed them, the most obvious being a requirement to vote someone off, who would then promptly be replaced.

A long-standing tradition of the show involved interaction with the cast of the currently-taping season of The Real World, usually involving a "sabotage mission" of some sort. Together the two shows would eventually spawn what is now The Real World/Road Rules Challenge.

Reality TV tropes in use: