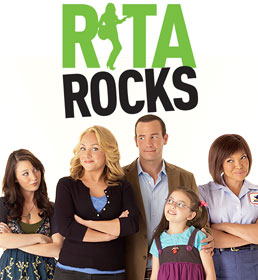 Multi-cam dom-com featuring Nicole Sullivan of MADtv and Kim Possible fame. Sullivan plays the titular Rita, a harried but Happily Married mother who finds a creative outlet in a garage band with her neighbor, her best friend, and her daughter's boyfriend (yeah, that's kind of weird).

Started off strong in the first season, but ratings dropped in the second. They began running two episodes at a time, and finally canceled it in Jan, 2010.