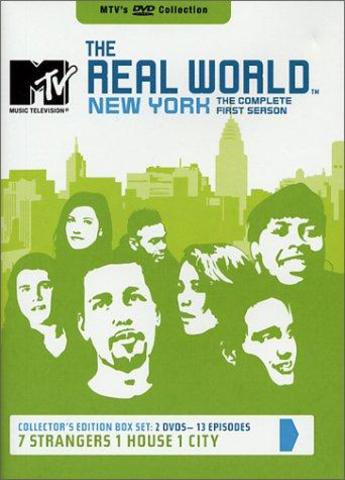 The DVD release of the original series.
"This is the true story of seven strangers picked to live in a house and have their lives taped. Find out what happens when people stop being polite and start getting real."
Advertisement:

The granddaddy of the reality show, this is one of MTV's biggest franchises, and effectively turned Reality Shows into one of the most popular American television format today.

In 1992, Mary Ellis Bunim and Jonathan Murray came up with the idea of putting a random grab bag of seven twenty-somethings of different races, gender, and sexualities into an upscale apartment for six months, install a bunch of cameras inside, and air the ensuing film on national television. The ensuing show was a massive hit and, along with COPS, is considered one of the fathers of reality TV. It spawned a Spin-Off, Road Rules (aka "The Real World in an RV!"), and a crossover series, Real World/Road Rules Challenge (later known as The Challenge).

The early seasons were ground-breaking in the way they dealt with a ton of social issues rarely addressed on television at the time, such as homophobia, AIDS, abortion, racism, alcoholism, eating disorders, etc. However, gimmicks began to slowly enter into the premise after the show's fourth season. The most notable one was forcing the group to work at a job of MTV's choosing, which quickly went from something normal but meaningful like working at an after-school program, to glamorous media-related jobs. Further changing things was the ratings success of The Real World: Hawai'i, which featured a gaggle of hedonistic party animals whose topless hot-tub parties and marathon drinking caused the show to score major ratings. This led to the producers slowly abandoning the documentary-style nature of the show, as later seasons became more and more about picking people who will get drunk, make out, and start fights on-camera.

Furthermore, it has managed to kick start careers for a number of talented people. Notable alumni include:

The series remains MTV's longest-running show. In 2019, a MTV-produced Real World season will premiere exclusively for Facebook's Facebook Watch video platform. In 2021, MTV started doing several mini-series titled The Real World: Homecoming for Paramount+ where they unite the casts of the original seasons for two weeks to live amongst each other again. Casts that have been reunited include the first New York season, Los Angeles, and New Orleans.

Not to be confused with Real Life, that place where most of us live.