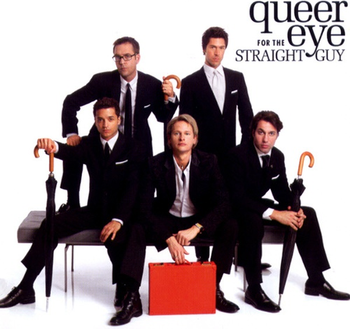 Queer Eye was a makeover reality series that ran from 2003 to 2007, called Queer Eye for the Straight Guy in its first two seasons. The format involved a subject — usually, a straight guy, as implied by the original title — getting an all-around aesthetic upgrade from five gay men known as the "Fab Five":

This is all geared toward a significant event planned for the end of the show, such as a family reunion, marriage proposal, career-related gathering, engagement party, or sometimes just a regular old party. The Five indulge in a lot of catty remarks and Camp Gay humor along the way, which kept the show entertaining but also led to accusations of gay Modern Minstrelsy from some quarters. Nonetheless the show was well received by much of the gay press and led to a tie-in book, a hit soundtrack album and a short-lived Spin-Off series, Queer Eye for the Straight Girl.

Netflix revived the series in 2018. The revival is set in and around Atlanta, Georgia, and features a new Fab Five.

It fueled an (American) Cyclic National Fascination over a heavily stereotyped "gay culture" that lasted throughout The Noughties.