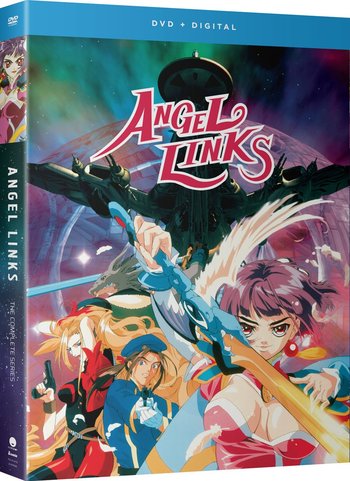 Angel Links is a 13-episode anime produced by Sunrise and based on a novel by Hideaki Ibuki. It takes place in the same universe as Outlaw Star, but the stories have little to do with each other (aside from sharing a couple of characters).

The protagonist of the story is Meifon Li. She's the brash, busty, 16-year old head of Angel Links, a corporation which provides pro bono security escort service to small-time merchants and freighters out in the cold depths of space. Of course, this doesn't go over well with any of the for-profit escort companies who have to compete with her. Nor does it sit well with any of the space pirates who are unfortunate enough to cross the path of her awesomely powered Cool Ship. But Meifon doesn't care what anyone else thinks. The running of Angel Links was the sacred mission handed to her by her dying grandfather, and she intends to remain at the helm, milking it for as much fun and adventure as she can.

Aiding her is her partner in battle, Taffei, a catlike animal that can transform into a powerful sword. It's cute, has wings for ears, and spends most of its downtime chilling in Meifon's pneumatic cleavage. The crew of Meifon's Cool Ship consists of Kosei Hida, (her bishy, tea-making Boy Friday), Valeria Vertone, (her battle-hardened tactician), and Duuz Delax Rex, (a stoic, lizard-like muscleman who, when he's not cracking enemy skulls, spends his time calmly polishing a sword the size of Pittsburgh.) It should be noted that Valeria and Duuz, prior to this series, appeared in Outlaw Star, but with slightly different appearances and personalities. As such, it can be argued that Angel Links inhabits an Alternate Continuity to the former series, (although it's probably best not to think about it too hard.)

Meifon Li and her crew spend most of this series darting and zooming from one flashy space adventure to another, but our heroine's life gets turned upside-down one day when she rescues Leon Lau, a wealthy, bishy philanthropist whom she soon falls head-over-spiked-heels for. Ah, but who is this alluring, mysterious gentleman? What connection might he have to Meifon's late grandfather? And just how does Meifon keep her uniform from slipping off of her chest every time she performs a backflip or a cool Finishing Move? The answers to these and many other questions are to be found in this action-packed sci-fi epic! (Well...okay... they don't answer the question about the uniform-not-slipping in battle. But it's doubtful even Deep Thought would know the answer to that one...)