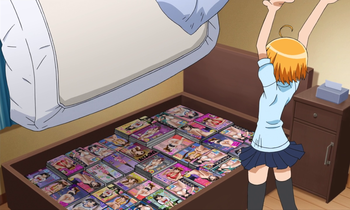 This one is sometimes Truth in Television. However, with the rise of Internet streaming/downloading and the decline of physical video and print media, Real Life porn stashes are more likely to be virtual caches hidden in obscure subdirectories and encrypted partitions on people's hard drives.note And if it's a private computer the person isn't sharing with anyone, they might not even do that and will simply have the appropriate folder right on their desktop. Nonetheless, in-media uses of the trope are highly resistant to Time Marches On and Technology Marches On, preferring to stick with depictions of physical media stashes, likely because it's a decades-old comedy trope and the fact that it's easier to make jokes, especially visual jokes, about a stack of magazines or movies than computer subfolders.