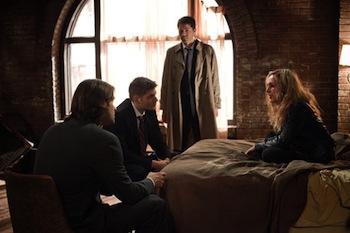 "So, I gotta ask. Um...what's up with the hair?" —Dean [to Meg]
"I was bad, you were good, life was easier. Now it's all so messy. I'm kinda good, which sucks, and you're kinda bad, which is actually all manner of hot."
— Meg [reminiscing about the Apocalypse to Castiel]
Advertisement:

Sam finds accounts of unrelated dead bodies showing up all over the Midwest with severe burns around their eyes, hands, and feet, puncture wounds through the backs of their hands, and eyes and internal organs liquefied. Sam and Dean go to Lincoln Springs, Missouri

, where the last victim, Ann Morton, was found. Ann's husband tells them that his wife was not herself before she died. She was digging holes all over town, and he saw her eyes flash black.

Dean and Sam realize that someone is killing people possessed by demons, and set out to question Wendy Rice, a local historian who had arranged to meet with Ann Morton before she died. While they are at her home, three of Crowley's mooks come to the door and attack them. During the fight, one demon escapes with a map Wendy had recreated of the town before a 100-year flood cycle destroyed all records. Before Dean can stab one of the demons with Ruby's knife, it smokes out of its vessel and enters Wendy. Suddenly, Castiel appears, smiting the demon attacking Sam and capturing the possessed Wendy.

Castiel wants to tell Sam and Dean his true mission but, under Naomi's control, instead tells them he has been looking for the other half of the demon tablet and trying to stop the demons from finding a parchment that could help them to translate Crowley's half of the demon tablet without a prophet. Castiel tortures the possessed Wendy, who reveals that they have a hostage who has been telling them where Lucifer's crypts are. Before she can tell Sam and Dean that there is no parchment and instead they are looking for the angel tablet in Lucifer's crypts, Castiel kills her.

Castiel disappears, and Sam and Dean race to the hotel where the demon said the hostage is being kept. They find Castiel has already smote two more of Crowley's mooks. Castiel tells them the hostage is in the bathroom, and when they open the door they find a blonde, bloodied, and bound Meg. Even though Castiel realizes Meg will likely reveal the truth to the Winchesters, Naomi allows him to work with her, as she knows the location of Lucifer's crypts. She tells them that she has been being tortured by Crowley for the last year, but has not given up the location of the angel tablet. She agrees to show them where the crypt is. Castiel cleans some of her wounds, and Meg reveals she has feelings for Castiel.

Meg leads them to an abandoned warehouse. Castiel and Dean enter to look for the angel tablet while Sam and Meg wait outside to watch their backs. Castiel sees there is only one item warded against angels in the crypt, and Dean opens the warded box and finds the angel tablet. Castiel insists Dean gives him the tablet, but Dean is unwilling to give it to Castiel unless he explains how he got out of Purgatory. Naomi commands Castiel to kill Dean, and Castiel savagely beats him. Crowley's mooks attack and Sam and Meg manage to kill them. Crowley appears, and Meg sends Sam to Dean and Cas. Dean manages to get through to Cas, who picks up the angel tablet. Naomi's control over Castiel is broken, but he takes the angel tablet and leaves, saying that he needs to protect it from Naomi and from Dean. Sam and Dean escape from Crowley after Meg sacrifices herself to protect them and Cas. Naomi and Crowley later meet in the crypt, where they are revealed to have history together. Castiel is shown on a bus with the tablet.

For this episode = 9 demons and 9 humans.