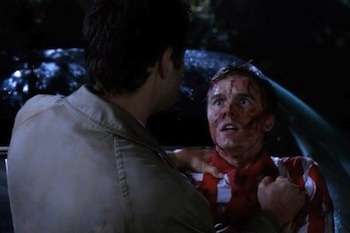 I know. They're controlling us, Castiel.
"We need everything, Dean. And I need both of you, as you say, to stow your crap. Can you do that?"
—Castiel [to Sam and Dean]

Dean drives to Kermit, Texas, and he and Sam get into an argument about whether Benny can be trusted, which leads to Dean leaving for Rufus' cabin. Naomi instructs Castiel to save Samandriel from Crowley, and Castiel goes to Dean for help. Dean and Castiel know that Samandriel is in the vicinity of Hastings, Nebraska, and search for odd events that occur when angels scream. They find an account of a man being badly burnt by a bush, and after questioning the victim find that he heard a phrase in Enochian when the shrubbery burst into flame. They continue to search abandoned factories nearby until they find a factory guarded by demons disguised as derelicts. Dean realizes they need more help to take on that number of demons in a warehouse with angel warding, but balks when Castiel says they need Sam. Instead, they go to Garth's boat and find Kevin trying unsuccessfully to translate half of the demon tablet. Kevin gives them the ingredients needed for the demon bomb, and Castiel says he will get what they need. Besides getting the ingredients for the bomb, Castiel talks a reluctant Sam into joining them in the rescue attempt.

Sam and Dean remove the angel wards from the warehouse, killing several demons in the process. While the brothers are attacking his mooks, Crowley has tapped into the default programming of angels by inserting spikes into Samandriel's brain, and finds out that there is an angel tablet. Castiel is finally able to enter the warehouse, but is not at full power and is suffering flashbacks, wherein Naomi seems to be inserting a device in his eye. By the time they they break down the door of the room where Crowley has Samandriel, Crowley has escaped, but Castiel manages to save Samandriel, who tells Castiel that they are being controlled and Naomi is behind this. Before Samandriel can reveal more to Castiel, Naomi asserts her control over Castiel, and Castiel kills Samandriel. Castiel tells the Winchesters that he needs to take Samandriel's body back to Heaven, but the brothers realize something is wrong with Castiel.

Sam has to decide whether he wants to be part of Amelia's life. He decides not to go back to her, and remain a hunter with his brother. Dean decides to appease Sam, and tells Benny he cannot be part of his life.