A Little Slice Of Kevin 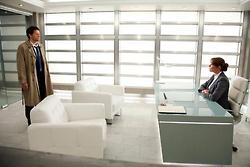 "You can't save everyone, my friend. Though you try."
—Castiel to Dean

With the Trans still on the run, Crowley starts gathering up the other potential prophets in hopes that one of them will be able to translate the Word in his possession. He finds out the name of the prophets by torturing a captured angel, Samandriel. Tired of hiding, Linda hires a witch to help her and Kevin make more demon bombs. Of course, the witch, Delta Mendota, betrays them to Crowley, who captures Kevin. Meanwhile, Castiel returns from Purgatory, claiming not to know how he got out. Castiel rejoins the Winchester brothers to rescue Kevin and the future prophets after Mrs. Tran asks for their help and delivers a demon she captured. Castiel does rescue Kevin from Crowley despite not yet being at full power, but the tablet is broken and Crowley escapes with a piece. We find out that Castiel never planned to leave Purgatory as he felt he belonged there as punishment for his actions, and was delivered from Purgatory by a group of angels led by Naomi, who are using Castiel and compelling him against his will and without his knowledge to gather information about the Winchesters.

For this episode = 7 demons and 9 humans.