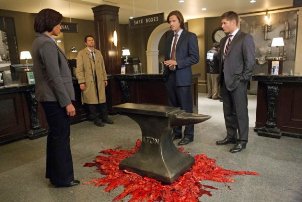 That's looney alright.
"I understand. The bird represents God and coyote is man, endlessly chasing the divine, yet never able to catch him. It's hilarious."
— Castiel describing Wile E. Coyote and the Road Runner
Advertisement:

In an effort to redeem himself, Castiel decides to become a hunter. He brings the Winchesters a case in Oklahoma City involving cartoon physics, but with deadlier consequences. They find that cartoonish phenomena correlate with robberies connected to residents of Sunset Fields Retirement Home. One of the residents is a contact of John Winchester named Fred Jones who used to live outside of Salt Lake City and happened to give both Dean and Sam their first beers. Fred Jones is also a powerful psychokinetic who now seems trapped in his own mind and spends all his time watching cartoons. They discover that the head of the retirement home, Dr. Mahoney, is using Fred's abilities to steal from the residents. Dean tries to thwart the doctor before he completes one final robbery, but finds it difficult to adjust to a world governed by cartoon logic. Castiel is able to enter the cartoonscape in Fred's mind and helps him to control his abilities, but Castiel remains conflicted about his own future. Sam helps Castiel to convince Fred that he has to face the real world, but Sam continues to exhibit stares leading to flashbacks which reveal Amelia's husband turned out to be alive after Sam and Amelia moved in together.