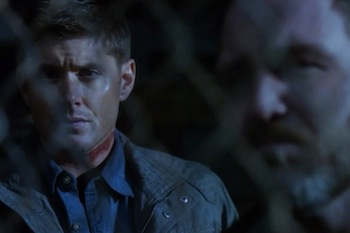 "Guys like us, we don't get a home. You know, we don't get family." —Dean to Benny
"What in God's great creation could a Winchester possibly owe a vampire?"
—Martin [to Dean]

Sam gets an old friend, Martin Creaser, to start keeping tabs on Benny in Carencro, Louisiana

. When a civilian dies of a vampire attack in proximity to Benny, Martin calls in Sam and Dean, and tells them that Benny has been going by the alias of Roy. While Dean is skeptical, he hears Martin out, and requests some time to do some investigating of his own; Martin is resistant, but Sam agrees to give him time. Sam thinks about Amelia, and how complicated things became after Don reappeared.

Dean goes to a diner Benny has been working at and asks the owner, Elizabeth, if she's seen "Roy"; Elizabeth says he left recently to go fishing. Dean leaves after giving Elizabeth his number and asking her to call if she sees him again. Dean finds Benny, who is burying a second victim. Benny says he's not the one killing people; rather, a rogue vampire, Desmond, is trying to start a new nest, and tried to recruit Benny. When Benny declined, Desmond started killing people in an attempt to blackmail Benny into joining. Benny swears he has not been preying on people, using Elizabeth, his great-granddaughter, as a motive to stay clean. Dean believes him, but Martin and Sam do not; as Dean and Sam argue, Martin knocks Dean out, and he and Sam leave Dean handcuffed and unconscious as they go after Benny.

When Dean comes to, he calls Benny, and warns him about Sam and Martin; Benny says Sam doesn't scare him, but Dean is adamant. He suggests that Benny lie low while Dean goes after Desmond but Benny insists on coming, saying he knows where Desmond is hiding. Later that night, Sam and Martin go to where Benny had been camping, only to find he's cleared out. Sam gets a text from Amelia, telling him to come quick and that it is urgent; Sam leaves Martin, and goes to Amelia. Sam tries calling Amelia, but the number is unavailable. Benny and Dean go to Desmond's hideout and split up. Dean runs across Desmond, who gets the better of him, scratching his neck and sampling the blood. Before he can start feeding, Benny kills Desmond. Benny notes the wound on Dean's neck and becomes hungry, but resists the urge and walks away. Dean joins him outside, where Benny remarks that his life here is over. Dean agrees, telling him to go deep underground, lest he attract any more attention.

Sam goes to Amelia's house, searching the place for trouble. However, looking in through a window, Sam sees that Amelia is perfectly fine, relaxing with Don, and leaves. Benny and Dean part ways once more. On the road, Dean calls Martin, telling him that the situation has been neutralized and he shouldn't go looking for Benny. Martin tells Dean that he is leaving and not to worry about him. A little while later, Benny gets a call from Martin from Elizabeth's phone. Martin tells Benny to meet him at the diner. Benny goes to the now-closed diner and finds Martin and Elizabeth inside, Elizabeth tied to a chair. Benny pleads with Martin to let Elizabeth go, but Martin refuses, goading Benny and trying to reveal Benny's true identity to Elizabeth. He cuts her neck in an attempt to draw out Benny's hunger, but Benny again manages to keep control, and asks Martin what he wants. Martin says he wants Benny's head; Benny lays his head on the counter in offering, apologizing to Elizabeth, and Martin moves in to attack.

Out on the road, Dean gets a call from Elizabeth, who begs him to come to the diner. Dean arrives, finding Elizabeth, traumatized and covered in blood, on the porch. He enters the diner, seeing that the place is trashed and blood is everywhere, and finds Martin with his throat ripped out. Benny is nowhere to be found.

Sam is at a bar; he tries the number Amelia's text came from. The call goes to a phone in the Impala's glovebox. Dean answers, and Sam, angry, deduces that it was Dean who sent the text. Dean admits that he switched out Amelia's number in Sam's phone with a burner, just in case. Sam asks if the case is closed, and if there were any casualties; Dean tells him Martin is dead. Dean tries to tell Sam what happened, but Sam refuses to listen and hangs up. Sam gets up to leave, but when he turns around, he sees that Amelia has found him at the bar.

For this episode = 3 humans and 1 vampire.