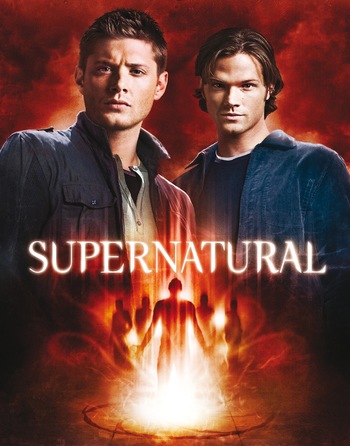 ♫ Carry on, my wayward son... ♫
"Dad wants us to pick up where he left off. Saving people. Hunting things. The family business."
— Dean Winchester
Advertisement:

Supernatural was an American paranormal/horror show that ran from 2005 to 2020. It is based around a Monster of the Week structure topped off with an over-reaching arc, while simultaneously retaining humor through various means of Leaning on the Fourth Wall. It follows Dean (Jensen Ackles) and Sam Winchester (Jared Padalecki), two brothers who hunt creatures based on Urban Legends, Classical Mythology, and Abrahamic theology, including Heaven Versus Hell.

The first season featured the brothers searching for their missing father, but, for the most part, the series features them Walking the Earth as they travel from town to town in search of supernatural problems to solve. Though the Big Bads get bigger each season, it's more common that Dean and Sam already have their hands full with each other. It uses a diverse score of classic rock songs that feature heavily throughout, to encapsulate the gritty rock-and-roll life they lead, and features Dean's 1967 Chevy Impala as almost another character.

The show is a real Long Runner for its kind, running for fifteen years and airing 327 episodes. Its first season aired on The WB during its last year on-air, but all following seasons aired on its successor, The CW, making it by far the network's longest scripted show.note The Vampire Diaries is a distant second at eight years and 171 episodes. Smallville ran for ten years and 217 episodes, but only half of those were on The CW. It was part of The CW's original scripted lineup, all of which it outlasted, and it was still airing come The New '20s, by which point there was no other scripted show from the Turn of the Millennium on the network anymore. The show consistently drew in high ratings for the network, no doubt playing a part in its longevity. It also employs a large cast, though strangely Long-Runner Cast Turnover is not practiced; other than Sam and Dean, who are regulars for the show's entire run, the only other consistent regular is Castiel (Misha Collins), who is a cast member in nine out of fifteen seasons. The other five regulars are seasonal; Ruby (Katie Cassidy, S3), Bela Talbot (Lauren Cohan, S3), Crowley (Mark Sheppard, S10-12), Lucifer (Mark Pellegrino, S12-13), and Jack (Alexander Calvert, S13-15). The Walking the Earth nature of the series might be a factor, as it's a hassle to keep track of many characters when the leads are constantly moving.

It was created by Eric Kripke, who also served as a showrunner for the first five seasons, alongside Robert Singer. Kripke envisioned a five-season plan from the beginning, and the fifth season finale was supposed to be the series finale. He departed from the show when The CW opted to renew it for more seasons, his position being replaced by a rotating series of showrunners, while Singer remained to the end.

On March 22, 2019, it was announced that the fifteenth season of Supernatural would be its last. The show aired its Grand Finale on November 19, 2020, after the COVID-19 Pandemic delayed the airing of the final seven episodes from spring to fall.

There is an in-progress recap page here. Tropes for individual episodes are listed there.

Example of:
Horsemen of the Apocalypse