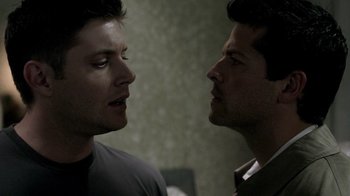 This page covers Ho Yay found in Supernatural. How did we manage to fit this all in one page?